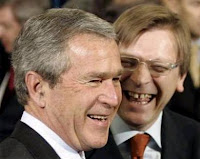 Tony Blair’s memoirs, released earlier today, reveal that while Bush junior was in the White House he, like many others, found the EU hard to get his head around. The Telegraph reports that in a 2001 G8 summit in Genoa, Bush was confused by the presence of Guy Verhofstadt:

“He didn’t know or recognise Guy, whose advice he listened to with considerable astonishment,” Mr Blair writes.

“He then turned to me and whispered, ‘Who is this guy?’

‘He is the prime minister of Belgium,’ I said.

“Belgium? George said, clearly aghast at the possible full extent of his stupidity. ‘Belgium is not part of the G8’.”

Mr Blair explained to Mr Bush that Mr Verhofstadt was there as “president of Europe”. Belgium held the presidency of the EU council at the time.

Mr Bush responded: “You got the Belgians running Europe?” before shaking his head, “now aghast at our stupidity”, Mr Blair writes.