The EU’s WTD is a spectacular failure – what will the Coalition do about it? 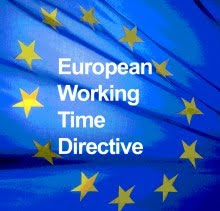 We have looked extensively at the EU’s draconian Working Time Directive in the past (see here, here, here, here, here, and here for example) warning that it just won’t go away. It is back in the headlines again, after a new survey has highlighted the negative impact it has on the NHS.

The survey of 500 senior surgeons for the Royal College of Surgeons warned that the rules were creating a generation of “clock-watchers” with a “lazy work ethic” who no longer felt personal responsibility for their patients. Among consultants who did comply with the 48 hour limit, 56 percent said they had only done so at the expense of patient safety.

And today we hear of further analysis by the RCS, showing that thousands more patients are now waiting longer than 18 weeks for surgery due to the EU rules. In fact, waiting times had been dropping since the 1990s but the WTD rules for junior doctors, which were implemented last August, has reversed the trend. The proportion of NHS patients having to wait longer than the 18-week target for non-emergency surgery such as hip replacements had almost doubled from 1.5 percent 18 months ago to nearly three percent in March this year.

As RCS President John Black put it, “To say the European Working Time Regulations has failed spectacularly would be a massive understatement.”

In total, the WTD costs the UK economy between £3.5 and £3.9 billion every year (at a time of austerity) – making this the costliest EU law on the UK statute book. This also makes it one of the more conspicuous examples of an EU regulation which continues to generate heavy costs year on year but that still remains unaddressed. It’s also a blow to those who claim that EU social policy is effectively dead.

The combination of the rules for on-call time, compensatory rest and the 48-hour limit has for years imposed heavy burdens on public sectors and business across Europe (in Sweden, the Netherlands and Germany for example) – without sufficient benefits in return. Trying to centrally plan how the working week should be organised for 27 different countries (with different healthcare systems, labour market models etc.) was always bound to spell trouble.

And very few European governments particularly like the WTD (the European Parliament is a different story). At least 15 member states are currently using the opt-out from the 48 hour working week to get around the on-call time/rest rules. But because of the difficulties in changing EU laws once agreed, the WTD remains in place despite all the costs and evidence.

The question now is: what will the Coalition government do about this spectacular failure? We have argued before that the UK should seek a comprehensive opt-out from EU social and employment policy, along the lines of what the Tories envisioned in opposition.

There are a range of reasons why this would be a sensible policy. Although we won’t repeat all the reasons here, it would, for example, be consistent with the Coalition’s pledge to cut costs and bring decision-making powers closer to communities, business and families. It would also be the only way to ensure that the UK (and other countries) won’t lose their opt-out from the 48-hour working week – which is continuously coming under attack from the European Parliament and narrow interests in Brussels.

Losing this derogation would increase the annual cost of the WTD to the UK economy to between £9.2 billion and £11.9 billion – a ridiculous amount at any time, but particularly now.

“It will be a top priority for the next Conservative government to restore social and employment legislation to national control.”

The Tory election manifesto then toned down this rhetoric quite a bit:

“We want to restore national control over those parts of social and employment legislation which have proved most damaging to our businesses and public services. For instance the application of the Working Time Directive on the NHS.”

This pledge, in turn, was dropped from the Coalition agreement, which merely states,

“We will examine the balance of the EU’s existing competences and will, in particular, work to limit the application of the Working Time Directive in the United Kingdom.”

A spokesman for the Department of Health was quoted in today’s Telegraph, saying:

“On the European Working Time Directive, the Health Secretary will support the Business Secretary in future negotiations on its revision, including maintenance of the opt-out.”

Not exactly the toughest statement, but better than nothing. Having dropped its pledge for repatriation, the Coalition Government needs to make the renegotiation of the WTD an absolute priority; it would save an awful a lot money and be consistent with the Coalition’s pledge to scrap unwanted laws. To fail to deliver in even this, the most obvious area of EU renegotiation, would leave a very bad taste.

And here there are allies to be found around Europe – it’s just a matter of going to work.