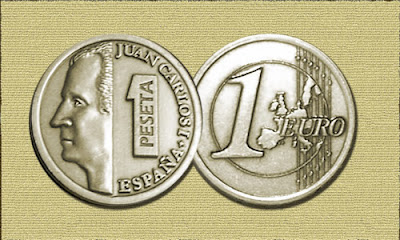 A recent Eurobarometer poll has found that the majority of Spaniards, a sizeable 54 percent, believe that “without the euro, with the peseta, we would have been able to confront the economic crisis”. Somewhat surprisingly, perhaps, this is higher than the eurozone average of 45 percent. (In a 2007 Open Europe poll, 51 percent of the Spanish said they would prefer the peseta over the euro – so the peseta has been missed for some time).

In an interview with Spanish daily La Vanguardia, the Head of the European Commission’s Representation in Barcelona, Manel Camós, has set out a rather customary EU explanation as to why people hold such odd views: ignorance, what else?

This makes us think that the public has not understood the advantages of the euro because the experts, in general, are convinced that thanks to the euro we have had the [economic] development that we have had and that we can overcome the crisis.

He goes on “both interest rates and the inflation rate have decreased. Before the euro in Spain the interest rate was higher than 14% and now, in spite of the crisis, it is around 4%”.

Ah, Señor Camós, those ill-informed Spaniards who don’t understand that the single currency only comes with benefits. How can they believe the words of people like the EU President Herman Van Rompuy, when he now admits that the euro served as a “sleeping pill” for the eurozone? Or the Bundesbank President Axel Weber when he points out, in the wake of the crisis that “the benefits of monetary union, in particular lower interest rates and the elimination of exchange rate risk, have not always been used wisely and have tempted some countries to live beyond their means” (e.g, the Spanish housing bubble)?

Or EU Commissioner for Competition Joaquín Almunia, a Spaniard himself, when he notes that countries like , and have experienced “a permanent loss of competitiveness since they are members of the Economic and Monetary Union”?

The truth is that keeping up with German monetary policy has undercut Spanish competitiveness and put strains on the economy, while low ECB interest rates have served to fuel the Spanish housing bubble, the effects of which we now see. At the same time, devaluation to put this right is now not an option for Spain which in turn will make the adjustment much more painful for ordinary people. Surely, any serious commentator or official must take this into account before accusing people of not getting it?

In fact, it wasn’t the people who got it wrong on the euro, as Mr Camós seems to suggest, but the self-appointed EU elite (as we’ve documented here).

At least some of them now have the courage to admit it.