Is the eurozone bailout legal? 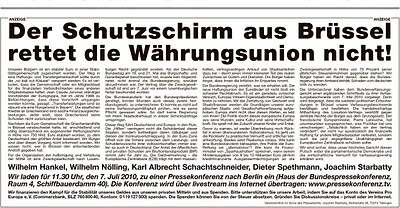 We’ve asked this question several times before, but the German think-tank Centrum für Europäische Politik has now also produced a very interesting study on the topic. In the study, the CEP trashes the legality of the €60 billion credit facility, agreed in May (as part of the €500 billion bailout package). This facility, as we set out here, involves the European Commission borrowing on the markets, using the EU budget as collateral. The legal base for the fund is Article 122 of the EU Treaties, intended to provide assistance to EU states in the event of natural disasters or sudden energy blackouts, (“exceptional circumstances” beyond a member state’s control, as the text states).

The study is all over the German press – and it certainly provides ammunition to the legal challenges against the bailout, currently making their way through the German Constitutional Court. The study claims that the public has been deceived on several points, arguing that the aid scheme will not be limited to three years, as the Commission claims, but would be “installed indefinitely”.

“The public has been assured that the EU cannot borrow above a maximum of €60 billion. In the legal text no such regulation can be found,” says the author of the study, Marcell Jeck.

The CEP also argues that the EU has misused Article 122 as a legal base for the bailout fund and that the European Parliament was not consulted, which amounts to a breach of EU law. The report also suggests that the bailout package does not satisfy the terms of the ’s previous rulings, as it does not provide a strong enough role for the German Parliament in approving aid.

The German government today responded to the study, with spokesperson Christoph Steegmans refusing to comment on the legal challenge itself, only saying that Germany is entering “unchartered constitutional territory”. He added, “The federal government has always taken great care to minimise possible constitutional risks along with the emergence of the EU aid package.”

Everybody is now awaiting the verdict from the German Constitutional Court on the legaility of the aid package. Tomorrow at 11h30, a press conference will be held by the four Professors who launched the legal complaint with the Court.

In an ad (see picture) in today’s Frankfurter Allgemeine Zeitung, they argue: “the aid package from Brussels does not save the currency union (…) It is forbidden that the Community or a Member State is liable for the financial obligations of another Member State (…) we are sure that our highest Court will declare this coup unconstitutional against parliamentary democracy and economic efficiency.”

For what it’s worth, we can see at least three reasons why the aid package should be ruled illegal, if it were to be objectively assessed in a Court:

1) As the CEP points out, the use of Article 122 in this way involves a heroic legal interpretation – particularly as the European Council has previously said that Article 122 must be compatible with the “no bail-out clause” in the EU treaties. The fact that Article 122 involves Qualified Majority Voting, rather than unanimity, makes it even more outrageous.

French Europe Minister Pierre Lellouche summarised how contentious the issue is last month when calling the bailout an “unprecedented” change to the EU treaties. “It is an enormous change,” he said. “It explains some of the reticence. It is expressly forbidden in the treaties by the famous no bail-out clause. De facto, we have changed the treaty.”

2) As the CEP also points out, the bailout package has sidelined the Bundestag and Bundesrat, despite the German Consitutional Court making a stronger role for these bodies in EU affairs conditional on approving the Lisbon treaty in its ruling on the Treaty last year.

3) In addition – something which the CEP doesn’t touch on – the EU Treaties clearly specify that any decision that involves the EU’s budget must be taken by unanimity, meaning that individual member states have a veto over any agreement. The stabilisation fund clearly does involve the EU budget, as the loans are backed by the budget and any defaults will be covered by the budget (there are even p.m. lines in the EU budget for the fund) – and yet it was decided by majority vote. Moving from unanimity to QMV is a transfer of power which needs the approval of national parliaments. In the words of the German Court:

“…The right of veto in the Council may not be waived without the participation of the competent legislative bodies even as regards subject-areas which have already been factually defined in the treaties. The representative of the German government in the European Council or in the Council may therefore only approve an amendment of primary law through the application of one of the special bridging clauses on behalf of the Federal Republic of Germany if the German Bundestag and, in so far as required by the provisions on legislation, the Bundesrat, have approved this decision within a period yet to be determined…”

The Court has come closer and closer to rule EU Treaties incompatible with the German Basic Law, in the cases of Maastricht, Amsterdam and Lisbon – but has always stopped just short of pulling the trigger. Will it go for the nucelar option this time?

Well, it would be a cataclysmic event if it decided to rule the bailout illegal – our feeling is that they will probably stop just short this time as well.

At the end of the day, this Court is not immune to politics, and the politics of the bailout is driven by a too-big-to-fail logic. But which ever way one looks at it, it doesn’t seem right.