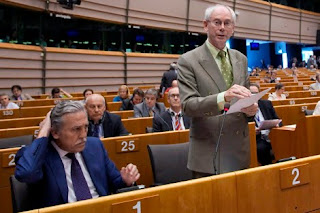 Those who worried that the Lisbon Treaty and the creation of a permanent EU president would sideline the rotating presidency held by national governments have been proved right. Spanish Daily El Mundo notes that during a speech in the European Parliament yesterday, neither President Herman Van Rompuy, nor President Barroso mentioned or thanked ’s EU Presidency for its role in last week’s European Council summit. It seems that even the fact that Van Rompuy sat next to Spaniard Diego Lopez Garrido (pictured on the left), the secretary of state for the EU, failed to remind the officials of ’s role. Barroso managed to find the time, however, to thank Catherine Ashton, the Parliament, the Commission, and the Council.

There are a number of potential reasons for the omission. The incident could be part of a larger EU effort to avoid any discussion of Spain, hoping people will forget it may be the next eurozone domino to fall. Or perhaps it demonstrates that the Brussels elite have little time for national governments or that there are simply so many presidencies within the EU that it’s becoming difficult to remember them all.