Managing expectations over an English breakfast 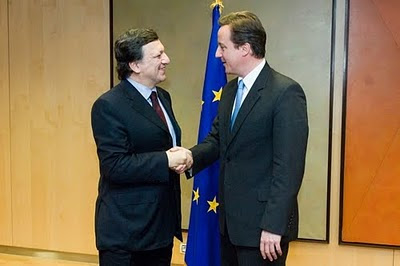 David Cameron has today participated in his first EU summit and has secured a preliminary assurance (assurances are never quite for certain in EU politics) that Britain will not have to submit its national budget to the Commission before it goes to the UK Parliament. At the same time, sanctions for violating the Growth and Stability Pact will primarily apply to countries in the eurozone. The actual proposal for an ‘EU economic government’ (which some EU leaders still insist on calling it) won’t be tabled until October, so there’s still a bit to play for – particularly on whether some of these proposals will be based on Qualified Majority Voting (meaning no veto for Cameron) or unanimity. The Commission, which initiates the legislation, has arbitrarily changed legal basis before, so nothing is for sure.

But this is definitely a fight that David Cameron can win – which is probably why the he chose to focus on it in the run-up to the summit. The draft conclusions (which helpfully are always available on the Danish Parliament’s website a few days before the Summit but still not through the UK Parliament – will that change now?) made this clear. As ever, managing expectations is key in politics. The pre-budget report, which is published in December in the UK, offers a convenient way out for the UK government and is the item that presumably will be ‘peer reviewed’ by the Commission and other national treasuries.

In fact, this has turned out to be the most uneventful EU summit in years – the most exciting event appears to have been that Commission President Jose Manuel Barroso served Cameron an English breakfast in order to make him feel at home (was Fredrik Reinfeldt served Swedish oatmeal?).

But remember, it’s been a very dramatic Spring and it’s hard to rival the drama of the “Super Weekend” back in May, when the ECB lost its independence and European taxpayers became liable for some €500 billion in eurozone bailout loans.

You have to give Cameron and George Osborne credit though. They’re in a very awkward position, simultaneously having to maintain peace within the coalition, keeping their backbenchers at bay and convincing their European partners that they’re not the devil incarnate. So far they’ve managed that balancing act exceptionally well. How long that will last is a different matter – as Benedict Brogan points out in today’s Telegraph. A number of run-ins are looming – the EU budget, UK taxpayers’ exposure to the bailout package and regulations to rein in the City.

Under the surface, of course, there are issues in the summit conclusions that should worry the Cameron government. The conclusions call on EU leaders to adopt the AIFM Directive “before the summer”. As we’ve noted before, for various reasons, passing this directive in a flawed form would land a blow to the UK economy and national interest.

The conclusions also call for “the Council and the European Parliament to rapidly adopt the legislative proposals on financial supervision to ensure that the European Systemic Risk Board and the three European Supervisory Authorities can begin working from the beginning of 2011.”

This proposal gives three new EU supervisors the power to overrule national regulators on financial oversight and technical standards. The Council and European Parliament are currently working out the details in negotiations. The Council’s version is significant (and transfers some supervisory powers from the UK to Brussels) – but the European Parliament’s proposal is potentially dynamite. It would create an effective single European regulator, located in Frankfurt with the power to make decisions over the recapitalisation of banks, for instance. According to the proposal, the FSA would be an “agent” of this new supervisor – not the other way around. By any definition, this would mean a transfer of powers.

It probably won’t be as bad as the EP’s draft but it will be very difficult for the UK to compltetly hold its position on these proposals – a legacy left by the previous Government.

Indeed, there are many EU summits to go before the UK’s coalition experiment is over and they will certinaly be tougher than this one.