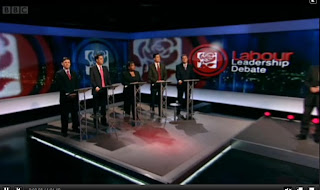 Newsnight featured the first televised hustings for the Labour leadership candidates last night – and it now turns out that none of them were ever particularly keen on us joining the euro. Or maybe it’s a case of a Nick Clegg-style change of heart now that it should be crystal clear to everyone that the economics and the politics of the single currency were shaky from the get-go.

Interestingly, Ed Balls made a comment that we can only describe as spot-on. He admitted that sometimes people use that ‘pro-European’ label to push their own political agendas, rather than as any objective measure of commitment to membership and cooperation within the European Union – as was the case with the euro. Such comments would have been very helpful a few years ago – when the undemocratic Lisbon Treaty sailed through the Commons (during which the “anti-European” label was used left, right and centre), but still, it might be a sign that the Labour Party is getting back in touch with popular sentiment (which is always easier in opposition to be fair). It also makes him seem much further to the centre of the party than might have been expected before his leadership campaign began. (That and his intervention last week that transitional controls on migration would be key to any future EU enlargement)

Diane Abbot’s answer was also refreshingly direct and (almost) free of tired platitudes – she even appeared to go so far as to suggest that the euro project was fundamentally flawed (without actually saying it of course), by suggesting that bringing disparate economies together and simply hoping they converge was never going to work.

Ed Miliband said he wanted a “Europe of our values”. Hmmm, what exactly does that mean? I wonder if Ed Miliband will be expanding where the Europe we currently have fails to meet his criterion of values – lack of transparency, accountability and democracy, perhaps?

Perhaps they’ve been reading our briefing on how the EU elite got it so drastically wrong on the euro: http://openeurope.org.uk/research/eurotheysaidit.pdf

Paxo to David Miliband: You must be thrilled that Ed Balls kept us out of the euro?

“Certainly…I don’t think it was a one man show to be absolutely fair, a bigger effort than that. We were right to stay out of the euro because the economic conditions weren’t right, and said all along, those of us that are strong Europeans, think that the worst thing we could do for Europe would be to put the political aim of working closely with our European partners before the fundamentals of economics, and we didn’t do that and actually we held to the position we set out in the mid-1990s, and it was the right position not to get pushed into that. “

“…but it was difficult at the time because there were some on the pro-european side who said ‘to be pro-european, you must join’. I think the Financial Times and the Economist both said that, but in retrospect, it was right to say the pro-european, pro-growth, pro-jobs position was for Britain not to go in, because if we had it would have been an economic, and therefore a political catastrophe for us, and so the right, hard-headed decision to do was what we finally decided to do in the end.”

“As a young backbencher, I had been in Parliament about two years I think, I remember going to a meeting in the House of Commons that Peter Mandelson had organised, to organise the case for the euro and I stood up and spoke against it…Like Ed I spoke up against it at the time – I didn’t believe that it would be in the best interests of the North of England and Scotland, I thought it would be good for the central part of Europe, I didn’t believe that the euro would be good for the whole of the country.”

“The issue about the euro is not nationalism or even regionalism. The issue about the euro was that some people were trying to drive us into the euro for political reasons – the politics of greater European Union, but the economic case never stacked up. That’s what we’re seeing with Greece now – you cannot bring economies that are so disparate together because when hard times strike, things turn into a mess.”

“I think we made the right decision on the euro – I think there is a wider issue though about how we work in Europe, to help people here in Britain. Andy mentioned earlier on the Agency Workers Directive – that would have given greater protection to people who were agency workers and stopped them being exploited at the expense of other workers in our society –we were too slow on that as a government. We should have brought that in, and actually that would have addressed some of the underlying issues that people raised in relation to immigration. So, I think we need to work in Europe, but we need to work for the Europe of our values – and that’s very important.”