Where would a Lib Dem/Tory pact leave the EU? 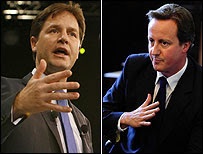 So both Gordon Brown and David Cameron have extended an offer to the Lib Dems to begin talks to see whether some sort of coalition, however loose, could be agreed upon to form a Government. But Nick Clegg has said that it is for the Conservatives, as the largest party, to try and form a workable majority first.

Speaking earlier today David Cameron clearly opened the door to a potential coalition with the Lib Dems. There has also been speculation that senior members from the Lib Dems could be offered roles in a Conservative-led government in return for their party’s support. However, Cameron also set out the manifesto pledges that his party would not be willing to compromise on, including pledges on immigration, defence and the commitment that “[no] government should give more powers to the European union”. According to reports, Mr Clegg and Mr Cameron have already spoken this afternoon and agreed to explore possible deals.

Now, there are lots of things to say about this deal or no-deal. Quite clearly, although many European countries find this type of political uncertainty business-as-usual following a national election, pro-longued uncertainty over who governs this country is in no one’s interest. Certainty is particularly important for cleaning up the public finances and injecting confidence into the markets (which are struggling to come to terms with the debt crisis and contagion effect facing the eurozone).

Much will happen before all is said and done, and other governing arrangements might triumph in the end – but just a note on what a potential Lib Dem/Tory coalition might mean for the prospects of EU reform, and the UK’s relationship with the rest of Europe:

While electoral reform and the economic recovery will be the key issues in such an arrangement, the EU is clearly a dividing line between the Lib-Dems and the Conservatives, with Nick Clegg still committed to joining the euro in the long-term, favouring a common EU immigration policy and calling for further integration in justice and home affairs. Should the two parties agree to a coalition arrangement, especially if involved a Lib Dem cabinet position, the Conservatives could naturally find it more difficult to push through some of their key policy pledges on Europe. In particular, the Conservatives might fail to get support in Parliament for their flagship policy of a ‘referendum-lock’ – a law that would require every future transfer of power to the EU to be subject to a referendum in the UK (also ‘the sovereign bill’ might suffer but it’s unclear how meaningful such a bill will be in practice in the first place).

The Conservatives and the Lib Dems could also clash on whether the UK should opt in to the EU’s growing number of initiatives in immigration, policing and security policy. Over the next five years, there are a range of key decisions a UK government must take in justice and home affairs, as the Lisbon Treaty drastically accelerates EU integration in this area. Ambitions to opt out of some parts of EU employment law could also be complicated by a Lib Dem/Conservative arrangement.

Needless to say, none of this will go down well with Tory back-benchers or grass-roots.

Other key areas, such as the upcoming negotiations on financial services legislation (in particular the AIFM Directive, set for May 18) and talks on the EU budget, will not necessarily be profoundly affected by a coalition arrangement, since all three main parties tend to broadly agree on substance (although perhaps not on strategy and tone).

However, it’s clear that the Lib Dems are out of step with the British public on the EU. Quite apart from the possible merits of a coalition in other areas, it would be most unfortunate if the Conservatives allowed a deal with the Lib Dems to kill off future momentum for EU reform. As we’ve argued before, Europe is changing – with the eurozone cracking and people across Europe seriously starting to question whether the current model for European integration is sustainable (most people already know it’s not democratic) – the long-term prospects for a UK government to find allies and change things in the EU for the better are greater now than in any time in recent history.

Cameron should therfore stand firm on his ideas for EU reform in the talks on a possible coalitionwith Nick Clegg.