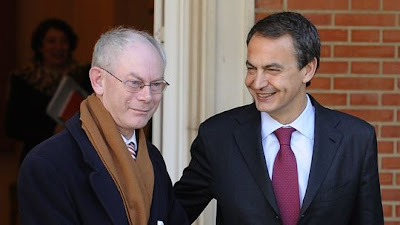 In an interview with Le Pèlerin Magazine, Herman Van Rompuy reveals that he tried everything in his power not to become EU President. “Until the last minute, I did anything I could to refuse this appointment”, he says, adding that he even asked Swedish PM Fredrik Reinfeldt to remove his name from the list of candidates.

Back in November 2009, Belgian newspaper De Standaard reported the following:

at a dinner on 28 October the French-German axis went to work: Sarkozy supported Merkel’s candidate, Herman Van Rompuy. The day after at the European summit in Brussels the two asked whether the Belgian would possibly accept the job. The PM was up for that, and started a tour of the capitals in order to present himself. He was liked.

He may be the accidental EU President, but he’s not that accidental. Politicans, after all, tend to be attracted by power – even haiku-writing ones.