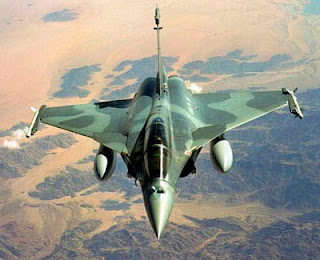 As details of a possible bailout plan for Greece, which could emerge from tomorrow’s EU summit, are leaked, it is becoming clearer that ‘solidarity’ for some EU leaders is not a one way street.

And we are not necessarily referring to German demands for renewed fiscal discipline in exchange for financial aid to Greece.

Instead, Reuters is reporting that France and Germany are trying to land plum defence contracts from Greece. Under the headline “Broke? Buy a few warships”, the article reports that, in an unexpected twist to the Greek debt crisis, France and Germany are pressing their beleaguered neighbour to buy six frigates, 15 helicopters and up to 40 top-of-the-range Rafale fighter aircraft (pictured), even as the country struggles to get its public finances in line.

The article quotes an advisor to the Greek PM George Papandreou saying: “No one is saying ‘Buy our warships or we won’t bail you out’, but the clear implication is that they will be more supportive if we do what they want on the armaments front”.

Possibly not the kind of solidarity that Mr Papandreou had in mind when he said he was expecting EU solidarity.