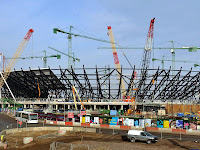 A BBC documentary has revealed that Londoners will not benefit from a “pre-sale” of tickets for the Olympic games thanks to EU competition law, which prevents discrimination in favour of the host country. Despite having swallowed the increases on their council tax since 2006 in order to fund the games, Londoners will apparently have to battle it out with 500 million Europeans for coveted games tickets.

International Olympic Committee President Jacques Rogge has said he is powerless to intervene, but helpfully suggested that the UK’s European neighbours, especially France and Germany, would snap up the tickets, ensuring seats were filled.

As London Assembly Member Dee Doocey put it, “it’s called European law and there’s nothing you can do about it”.

Favouring the host nation/side in ticket allocations is a long established principle in all manner of sporting fixtures, but is evidently not a principle that escapes the application of the great clunking fist that is EU competition policy.