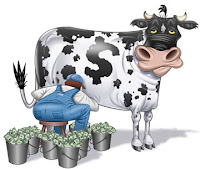 On his CAP Reform blog Jack Thurston has a story that illustrates one of the many reasons why reforming the EU’s wasteful and protectionist farming policies is so difficult. The post centres on Henrik Høegh, Denmark’s newly appointed Farming Minister, who is a long-time recipient of EU farming subsidies.

Since 2000, he has received a whopping €604,787.00 from the Common Agricultural Policy and his son and daughter are also thought to be receiving EU cash. Indeed, Høegh is not the only farming minister to have been in receipt of EU subsidies.

In an outright conflict of interest, Mr Høegh is now responsible for signing his own subsidy cheques, but also, as a member of the EU’s Council of Agriculture Ministers, deciding on the future of the CAP.

As Thurston concludes: “With the long-term future of the CAP currently under debate, can the Danish people be confident that Mr Høegh will be pursuing the public interest rather than his own private profits?”