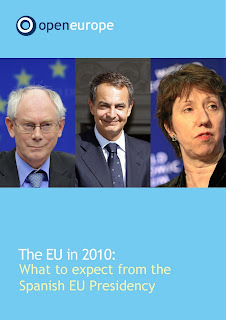 From 1 January 2010, Spain takes over the six-month rotating ‘presidency’, currently held by Sweden.

The new Lisbon Treaty rules mean that the country holding the Presidency is stripped of its power to ‘represent’ the EU because of the appointment of a permanent EU President and Foreign Minister. However, Spanish ministers will chair most meetings of the Council of Ministers, and as the first in the next ‘trio’ of presidencies, Spain gets to lay out an agenda for the EU for the first six months of the year.

In a new briefing note, Open Europe outlines the main priorities for the Spanish EU Presidency, and takes a look ahead to key events and developments in the EU in 2010.

Key things in the pipeline:

– New social legislation to bolster ‘European citizenship’, including turning the EU into a “factory of rights” Yikes!
– “Common economic governance”, including the creation of controversial new EU financial supervisory authorities and new rules for managers of alternative investment funds
– Speedy establishment of the new EU Foreign Service – hoped to become “the biggest diplomatic service in the world”
– Efforts to turn the controversial ‘Stockholm Programme’ into concrete justice and home affairs legislation

What’s clear is that the Spanish government wants to use its Presidency to achieve greater political, social and economic integration in Europe – to work for a more ‘unified’ EU. This is fundamentally at odds with British priorities for the EU in 2010. Reformist governments must resist moves towards ‘building Europe’ for the sake of it, and instead concentrate on promoting economic reform.

In particular, the Spanish government’s determination to push for new EU social legislation over the next six months and beyond should ring alarm bells at Westminster. The UK Conservatives have said that if they win next year’s election, they will fight for control over social and employment policy to be returned to the UK where it can be properly controlled closer the people it affects. This kind of legislation already represents a huge regulatory burden in the UK, and the Spanish government’s talk of turning the EU into a ‘factory of rights’ tells us fundamental reform is more urgent than ever.

Please click here to read the briefing: The EU in 2010 – what to expect from the Spanish Presidency: