Soon to be your President? 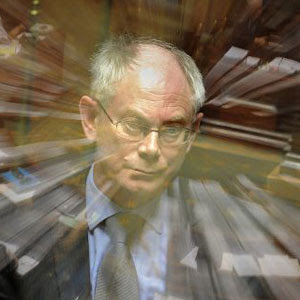 There’s some interesting background on the frontrunner for the Presidency of the European Union, Belgian PM Herman Van Rompuy.

Last week, he laid out his views on how the EU’s budget should be financed in the future at a dinner of the secretive Bilderberg group, pleading for direct EU taxes.

And as noted by the Telegraph yesterday, he was an architect of the Flemish Christian Democrats’ federalist manifesto, which calls for more EU symbols in town halls, schools and sporting events. The story is also picked up in Belgian daily De Standaard today.

“Of course CD&V – Christian Democrat Party – would have wished for a bit more with regards to making decisionmaking procedures in the Council easier, in the field of social and fiscal policy and in the field of foreign policy. But because politics is the art of the possible, we think the text of the Convention is a great success.”

It notes: “we plead for the preservation of EU structural funds”, (note that the EU Court of Auditors has now for the 15th time in a row refused to sign off the EU books, due in no small part to the mismanagement of these funds.)

Furthermore, Van Rompuy’s manifesto pleaded for a social Europe – wanting Europe to “formulate social minimum norms”, and calling for the things that ended up in the Lisbon Treaty: the removal of veto powers for Justice and Home Affairs legislation, an EU Prosecutor, and a harmonised asylum policy.

On EU defence, the manifesto states that a “credible European defence policy requires the EU to receive the necessary competences, structures and means”, including:

Last but not least the manifesto notes that “taking decisions by majority needs to become to rule, also in domains which are traditionally very closely connected with national sovereignty, such as justice, internal affairs, fiscal matters, social policy and foreign policy.”

Van Rompuy himself was an avid supporter of the European Constitution, and is reported to have been very relieved that there was no referendum in Belgium. He reportedly hated the debates in France and the Netherlands, in which he discovered a sort of demagogy to which “even the calculating citizen lends a willing ear”.

He has also blamed the financial crisis on the “Anglosaxon model”, saying: “The Anglosaxon model of full economic freedom was celebrated. But it was there that the crisis originated, not with us”. In one of his books, he added that: “The logic of the market is often stronger than any deontological code. There is barely a stronger force in the world than the force of money. Today it mops up societies all over the world. Only Islam is resisting, although it is doing so often because of complete intolerance.” (Vernieuwing in hoofd in hart: een tegendraadse visie, 1998)

Van Rompuy is an avid supporter of an EU superstate. In 1998 he said: “European harmonisation, which is being imposed through a unified currency, is running smoothly. Only fiscal harmonisation will still demand a lot of effort” (De Morgen, 28 maart 1998).

And back in 1989, as President of the Flemish Christian Democrat Party, he was calling for monetary and political union in a new set of treaties. He said: “Once EMU has been realised, the realisation of political union will get an extra boost as a logical and indispensable complement of EMU”. He said: “Council, Parliament and Commission would have to speak out first in favour of the attempt to achieve a monetary and political union, if necessary in one Treaty or in two separate treaties”. (De Tijd, 5 December 1989)

As well as being a classic EU federalist, Von Rompuy’s democratic credentials are also fit for the EU. On publication of the de Larosiere report, which called for greater financial regulation in Europe, he commented: “Let’s not discuss it too much, let’s implement it as soon as possible.”

Interestingly, he criticised former Belgian PM Jean-Luc Dehaene for wanting to leave Belgium in 1994 to become EU Commission President, saying: “I was furious at Dehaene when he wanted to go to the European Commission. I have sent him a letter twice, hopefully for him he has thrown it away. I did not want it and I found it a shame that he would leave us in the lurch.” (De Morgen, 11 February 2006).

Is he about to leave Belgium in the lurch too, and fulfill a wish to become EU President?

Van Rompuy seems pretty good at doing the opposite of what he has pledged. In 2007 he warned: “I know that some are contemplating having a Belgian Federal government backed only by a minority of Flemish MPs in the Belgian Parliament. A government which only has a majority in Wallonia is playing with fire. I am now speaking in the interest of the country: this is dangerous for the sake of the State” (De Morgen, 27 januari 2007). One year later he was and still is the leader of such a government.

In fact, van Rompuy is an avid supporter of the credo: “Don’t remind politicians of earlier statements”. Last summer, he said:

“Everybody has a history, but nobody is as often reminded about it as us. (…) You said this, but you used to say that. That’s a vicious circle, very perverse. In order to be noticed, you have to be controversial, but if you’re being noticed enough and thus get elected, you have to make compromises. And then journalists start reminding about your controversial statements in the past: you’re suffering a loss of face and you get a credibility problem.” (Humo, 3 June 2009)