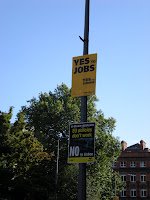 Reuters has the story that Ireland’s largest independent bookies, Boylesport, is already paying out on a Yes vote for the second Lisbon Treaty referendum, to be held on 2 October.

Apparently their spokesman said, “With odds at 1/12 a positive outcome looks like a foregone conclusion at this stage”, before adding, “although we do expect it to be tight.”
Rival betting company Paddy Power has said they won’t be paying out a penny before 2 October, perhaps wary of getting their fingers burned like last year when they paid out more than 180,000 euros to those who had placed Yes wagers, before even a single vote had been counted.
While the Yes side do have a lead in the polls, the latest Millward Brown poll at the weekend shows that 21% of people still say they don’t know how they are going to vote, which means there is still time to convince people that the Treaty is a bad deal for Ireland and a bad deal for Europe.
See here to read why http://www.europesaysno.org/