Rasmussen v. Lord Myners (and the rest of the City) 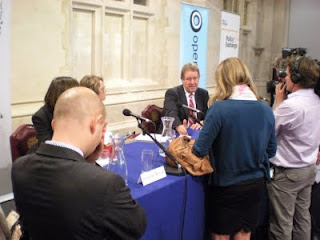 In case you missed it, Open Europe last week organised a debate on the EU’s proposed new rules for hedge funds, private equity firms, and various other funds currently not regulated by EU law. In good-old Brussels fashion the proposal goes under the acronym AIFMD (Alternative Investment Fund Managers Directive), and has been recieved with some scepticism in the City of London – to put it mildly.

In a Guildhall filled to the brink with angry pin-striped suited City people, the AIFM Directive’s key proponent, Poul Nuryp Rasmussen, fearlessly explained why he didn’t think the proposal goes far enough. The arguments aside, you have to give Rasmussen credit for his dedication, courage and willingness to walk into what can only be described as a lion’s den. And he certainly stood his ground. During the course of the debate, it became evident that Rasmussen knows more about the alternative investment industry than the industry itself perhaps feels comfortable admitting. It would be a mistake to underestimate him, particularly as he still – despite no longer being an MEP – has much input into what kind of amendments the socialists in the EP will put down on the draft Directive.

Rasmussen carries a lot of respect around Europe. During the 90s he took on the unions in Denmark in a bid to get the Danish economy up and running again – a point he was keen to make at the end of the debate. This, he said, highlights that he’s a “pragmatic Scandinavian” and a “pro-growth guy” (in addition to being an economist). He’s not out to get the City of London. A Scandianvian economist with pragmatist credentials is the nightmare opponent for the alternative investment industry, insofar as he’ll draw a lot of sympathy from around Europe (and hedge fund managers aren’t exactly the most popular kids on the block). However, notwithstanding his courage and the rest of it, the arguments are against Rasmussen on this issue – as we’ve outlined here.

The main counter-blast to Rasmussen’s arguments did not come from any of the industry representatives, but from City Minister Lord Myners, who used surprisingly strong rethoric – no doubt mindful of his audience. In particular Lord Myners hit out at “the lamentable lack of consultation” which preceded the Directive, and said that the proposal amounted to “protectionism hiding as if it were protection”.

One of the most interesting admissions from Rasmussen was that the Directive was designed to keep fund managers from the rest of the world out of the single market, unless they “pay a price”. “No one can have my Danish passport”, Rasmussen said. As we’ve argued many times before, this type of protectionist thinking remains one of the EU’s greatest flaws. Whether it’s raising barriers to global capital flows and investment, or free trade in products and agricultural commodities, this kind of approach leaves everyone worse off.

This flaw is more than enough reason to oppose the draft Directive in its current form.